Borobudur Temple (one of the Seven Wonders of the world) - Magelang, Indonesia 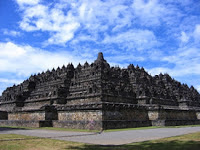 Borobudur Temple is one of the most beautiful and historical heritage in the world that is recorded in the World Heritage List. Building Borobudur is the largest Buddhist structure in the world and has been recognized as a heritage site ever created by humans, and until now have always visited by millions of domestic and foreign tourists. Borobudur has no form of the building is second to none in the world. The architecture is inspired by the shape of the micro cosmos philosophy that will lead to a variety of questions such as when, and how, and how long it will take to build, and by whom. The answer will surely those things are still a mystery to this day in the absence of any of the documents can be found. Brief that the inscription was found, the expert stated that Borobudur was built around the 8th century, King Samaratungga Sailendra dynasty ruled kingdom. 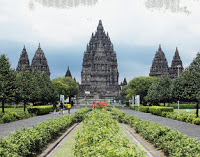 This temple is the biggest Hindu relics in the border region of Central Java and Yogyakarta, located approximately 17 kilometers East of the city of Yogyakarta. Building Prambanan temple complex is the temple facing east, with the overall shape resembles a mound on a shadow puppet 47 meters.Pillars of Hinduism knows Tri-Murti, consisting of Brahmins as God the Creator, Lord Vishnu as the Preserver and Lord Shiva as the Destroyer.While the main chamber of the main temple complex of Prambanan temple occupied by Lord Shiva as Mahadeva suggesting that mreupakan Prambanan Shiva Temple.

History pagoda Sam Poo Kong is a haven admiral Cheng Ho, a Chinese explorer Moslem origin. Simongan located in Semarang, the unique with two main worship building a large temple and cave sam kong po. large pagoda and the cave is a very important building among all, and was the center of all the activities of worship, not only was there tho temple tees kong, used so helmsman Kyai shrine (tomb of Ship helmsman), Kyai Anchors (where the ship lay anchor ), clerics Cundrik Earth (where all types of weapons) and Mbah Kyai / Nyai Tumpeng (relating to the affairs of the food on the ship). In this temple there are also sculptures and paintings or drawings depicting the journey of Admiral Cheng Ho the ocean.