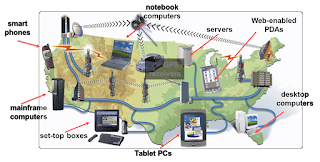 Telecommunications is a field of information systems technology, which is rapidly changing and highly technical. Most business practitioners, it does not require detailed knowledge, the technical characteristics. However, you need to understand some important characteristics, from the basic components of the telecommunications network. This understanding will help you, to participate effectively in decision-making.

a). Terminal: such as networked personal computers, computer networks, or equipment information. Each device input / output, which uses telecommunications network, to send or receive data, Adala terminals, including phones and various computer terminals.

b). Telecommunications Processors: a supportive, sending and receiving data between the terminal and the computer. This equipment such as modems, switches, and routers, perform a variety of functions, control and support in telecommunication networks. For example, the equipment, change the data, from digital to analog, or vice versa, encode, and eliminate code data, as well as controlling the speed and efficiency of the flow of communication between the computer and the terminal, in the network.

c). Channels of communication: the place where the data is sent and received. Telecommunication channel can use a combination of multiple media, such as copper wire, coaxial cable, or fiber optic cable, or use wireless systems, such as short wave, satellite communications, radio and cellular systems, for interconnecting components, from telecommunications networks.

d). Computers: shape in all sizes and types are linked by a telecommunication network in order to perform information processing tasks. For example, a mainframe computer can act as the host computer, the extensive network, equipped with a medium scale computer, which acts as a front-end processor (Frond-end), while the microcomputer can act as a network server on a small network.

No matter how large or complex, jaringanelekomunikasi, in this world, the five basic categories of these components must be present to support the activities of the telecommunications organization. It is a conceptual framework that you can use to help you understand the various types of telecommunications networks in use today.