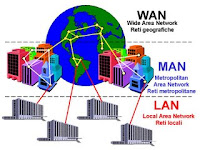 There are different types of tissues, which serves as the telecommunications infrastructure, to the Internet and corporate intranets and extranets internet based. However, from the perspective of the end user, there are only a few basic types, such as wide area networks and local area networks, as well as peer-to-peer, client-server, and network computing.

Wide Area Network (WAN)
Telecommunications network covering a wide geographical area called a Wide Area Network (WAN). Network that covers a broad area of the city or metropolitan (Metropolitan Area Network, MAN) may also be in this category. Such an extensive network, it has become necessary to perform daily activities, from the many businesses and organisasipemerintah, as well as end users. For example, the WAN is used by many multinational companies, sending and receiving information among employees, customers, suppliers, and other organizations in various cities, regions, countries around the world.

Local Area Network (LAN)
Connect computers and other information processing equipment at the point of limited physical area, such as offices, classrooms, buildings, manufacturing plants, or other workplace. LAN has become something common, for many organizations, to provide telecommunications network, which connects the end user to the offices, departments, and other working groups.
LAN using a variety of telecommunications media, such as telephone wires, coaxial cable, or even wireless radio and infrared systems. To interconnect microcomputers with perferal workplace computer. To communicate within the network, each computer usually has a circuit board called the Network Interface. Most LAN, using electric, a higher power, with a large capacity hard disk, called the File Server or Server Network, which contains a network operating system, which controls the communication and resource sharing network. For example, the distribution of copies of data files and software packages, kr mikrikomputer others in the network and controlling access to a shared laser printers and other network peripherals.

Virtual Private Network (VPN)
Many organizations use VPN to establish secure intranets and extranets, Virtual Private Network (VPN) is a secure network that uses the Internet as its backbone, but rely on firewalls, encryption, and other security features for internet and intranet connection, and a connection with the company other. So, for example, the VPN will allow companies to use the Internet, to secure its intranet, between branch offices, in a distant temapat manufacturing plant.

A trend that continues to happen is, the reduction in size (downsizing), large computer systems by replacing, with a client-server network. For example, client-server network of multiple LANs interconnected, can megganti network, based manframe great with plenty of end-user terminals. This usually requires a complicated undertaking, and expensive to install new software applications, to replace the software business information systems, based on older traditional mainframe, which is now called the Legacy System. Client-server networks, is considered more economical and flexible than legacy systems to meet the needs of end users, workgroups, and business units, and more adaptable, the computational workload diversity.

Network Computing.
The high dependency on computer hardware, software, and data from the Internet, intranets, and extranets, and other networks have stressed that for many pegguna "Networking is the user". Network Computing, or the concept of Network Centric network view, the central computing resources, from computing environment.