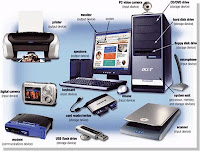 All computers, is a system of input, processing, output, storage, and control. We will discuss the trends, applications, and some of the basic concepts of various types of computer systems in use today. We will also discuss the changing technologies for input, output, and storage is provided by peralatanperiferal that is part of modern computer systems.

Types of Computer Systems.
Nowadays, computer systems are available in a variety of channels, shapes and computing capabilities. Development of hardware and software is very fast and the changing needs of end-users continue to encourage the emergence of a new computer model, from a combination cell phone / PDA with a very small size to multi-CPU mainframe to a very large company.
Categories such as mainframe systems, medium scale, and microcomputers are used to help us expedite the processing power and the number of end users that can be supported by various types of computer .. However, this is not klasisfikasi very different from each other, but still overlap. Thus, other names usually given to mention the usefulness of a particular type of computer. For example, a personal computer and technical work.

Computer Networks,
Network Computer (NC), is a category of microcomputers designed with the Internet and corporate intranets by administrative staff, pengawai operations, and other staff who have special computer skills or limited. NC is a low-cost microcomputers, secure, and form a network with no or minimal disk storage. Users NC depending on the intranet and internet servers to Web browsers and operating systems, software applications, as well as the access and storage of data.
One of the most intersting of the computer network is the low cost of purchase, renewal, maintenance, and support when compared to a full-featured PC. Other advantage for the business include ease of distribution and licensing of software, computing platforms standardization, reduction of support requirements for the end user, and improve the management of melaluimanagemen centralization and control the company's computer network resources. 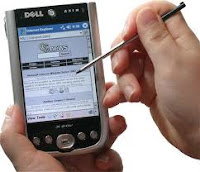 Microcomputer equipment of only a handful hand, personal digital assistant (PDA), is the most popular tools for information appliances category. PDAs, Web-enabled using the touch screen, pen-based handwriting recognition or keypad, so that employees who travel frequently, you can send and receive email, access the Web site, and the exchange of information, such as planning meetings, things to do, and sales contracts with their desktop PCs, or Web server.
The information appliances can also take the form of video games and other tools related to TV. These tools allow you to surf the World Wide Web or send and receive email, and watching TV or playing video games, at the same time. Other information equipment, including wireless PDAs and mobile phones, which can be connecting to the internet, and telephone-based home appliances, which can send and receive emails, and access the Web site
Computer Terminal,
Computer Terminal, is undergoing a massive conversion to the network computer equipment. Dumb terminals, namely keyboards, monitors with limited processing capability, but replaced with smart terminals, networks of computers that have been modified. Also includes a network terminal, which can be a Windows terminal, which relies on a network server for Windows software, processing power, and storage, or internet terminal, which relies on the Internet or intranet Web site server for operating systems and applications-software.
Smart Terminal, has many forms, and can perform data entry and processing tasks, information independently. This includes the use of a fairly wide range of terminal transactions in banks, retail stores, factories, and other workplaces. For example, Automated Teller Machine (ATM), a tape recorder factory production, and the terminal point of sale in retail stores. Smart terminals using the keypad, touch screen, item code scanner, and other input methods, to capture data, and interact with the end user, during the transaction, while controlling servers or computers in a network Lanya for further transaction processing
Posted by Unknown at 1/05/2013 10:57:00 PM